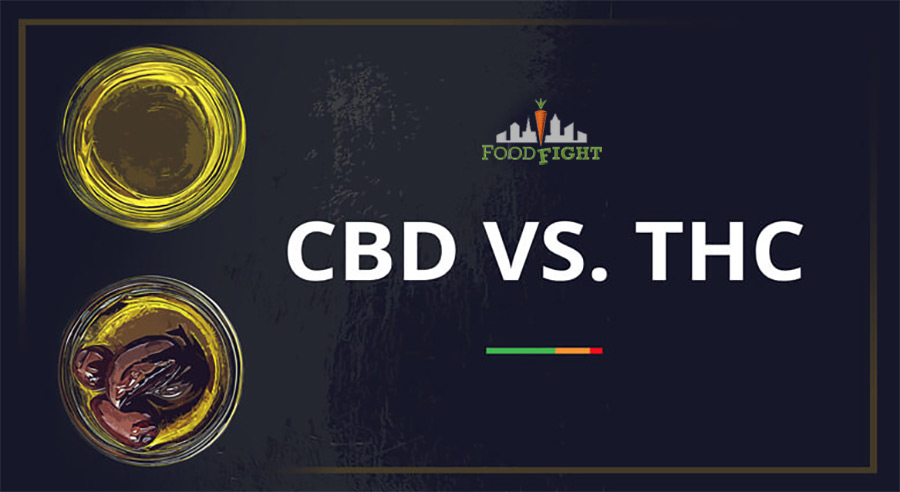 All mammals have an endocannabinoid system containing the CB1 and CB2 receptors that are capable of interacting with cannabinoids.

Raphael Mechoulam, organic chemist and professor of Medicinal Chemistry at the Hebrew University of Jerusalem, first isolated THC from cannabis in 1964. A year earlier, he had elucidated CBD, which was first discovered by Dr. Roger Adams of the University of Illinois in 1940. It was in 1965 when Mechoulam first synthesized THC and CBD. [1]Pertwee, R. G. (2006, January). Cannabinoid pharmacology: the first 66 years. British Journal of Pharmacology, 147(S1), S163–S171. https://doi.org/10.1038/sj.bjp.0706406

THC has long been known as the main psychoactive compound in cannabis – and is responsible for causing people to get high. By mimicking the effects of the neurotransmitters anandamide and 2-AG in the body, THC improves the perception of pain, sleep habits, eating habits, and other bodily functions.

As for CBD, it is non-psychotropic, which means it does not make you high. Cannabidiol is found in cannabis, as well as the hemp plant. Even though cannabinoids can be found in many plant species, CBD is the only one with well-known cannabinoid content.

The chemical formula of CBD and THC is the same, but their atoms are arranged differently. This slight variance is what makes THC psychoactive and CBD non-psychoactive. Although both compounds interact with human cannabinoid receptors, they produce dramatically different effects.

The non-psychoactive nature of CBD makes it a popular ingredient in dietary and natural supplements. It does its work – symptom relief and medical potential – with little or no noticeable effect on your cognitive abilities. In fact, research has shown that CBD might be able to balance the psychotic effects of THC.

Origin and Forms of CBD and THC 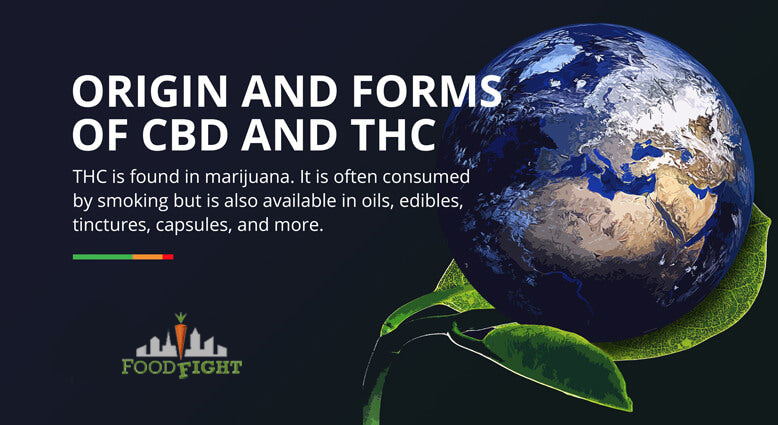 THC is found in marijuana. Smoking marijuana is the most common way to consume it, but it is also available in oils, tinctures, capsules, edibles, and other forms.

CBD is found in marijuana and hemp. It is available in oils, tinctures, soft gels, gummies, and more. 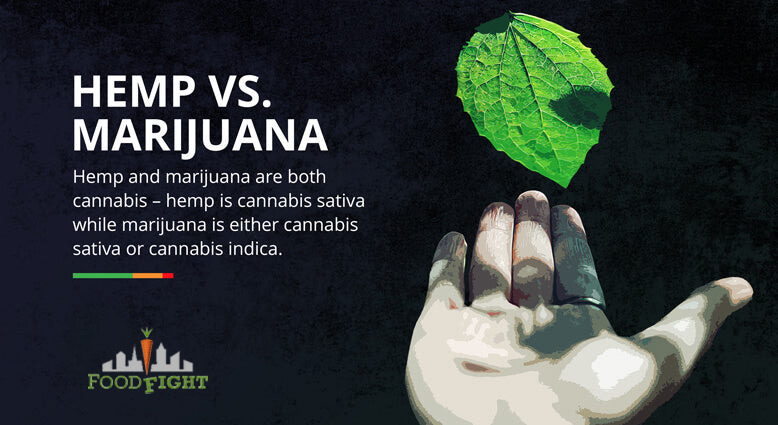 CBD is the same cannabinoid whether it is found in hemp or marijuana. 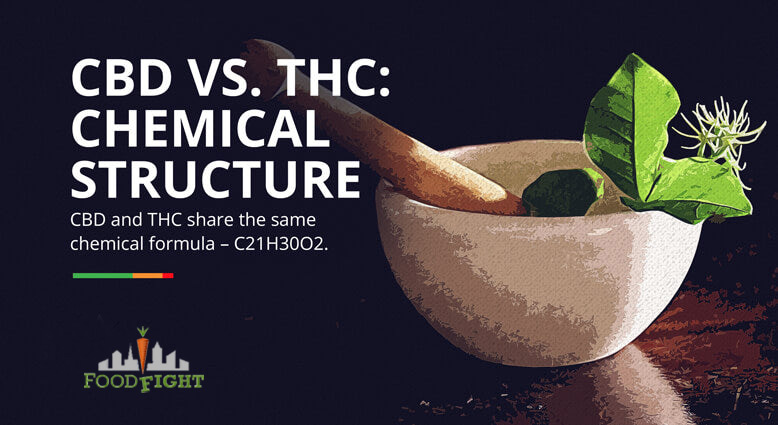 The chemical formulas of CBD and THC are the same – C21H30O2. Their molecular structures are also identical: 21 carbon atoms, 30 hydrogen atoms, and two oxygen atoms.

Both cannabinoids are produced in an identical manner in the cannabis plant. The only difference is the arrangement of the atoms. CBD has a molecular mass of 314.464 g/mol, while THC has a mass of 314.469 g/mol.

By synthase, cannabis Sativa produces cannabigerol acid (CBGA), which is then cyclized into tetrahydrocannabinolic acid (THCA) and cannabidiolic acid (CBDA) [2] Cannabigerol. Cannabigerol – an overview, ScienceDirect Topics. (n.d.). Retrieved May 19, 2022, from https://www.sciencedirect.com/topics/agricultural-and-biological-sciences/cannabigerol . Until sufficient heat is applied to cannabis Sativa extracts, they do not become psychoactive. A chemical reaction known as decarboxylation is necessary to produce the final THC and CBD compounds.

The solubility of THC and CBD in water is poor but good in alcohol and lipids. To ensure that THC preparations remain intact during analytical testing procedures, amber silicate glassware is typically used to store THC because it binds to glass and plastic.

How They Interact With The Endocannabinoid System 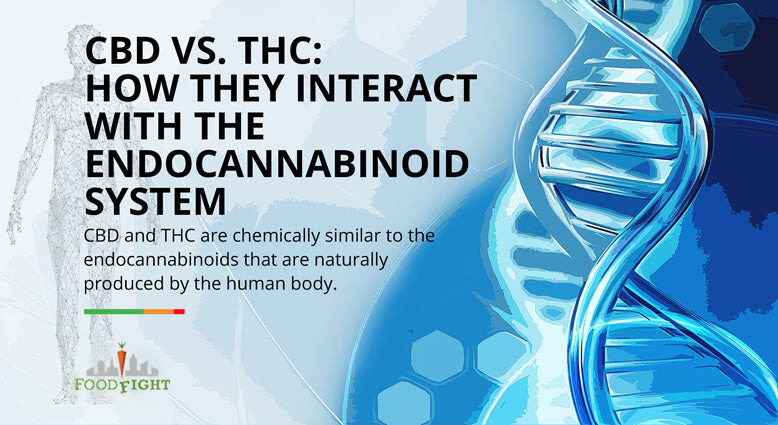 There are several similarities between CBD and THC and the endocannabinoids that the body naturally produces.

Cannabinoids interact with endocannabinoid receptors in our brains, which are responsible for cell communication and signaling. Neurotransmitters are released in the brain as a result of interaction with cannabinoids.

Human endocannabinoids are composed of two types of receptors: CB1 and CB2.

The CB1 receptor is mainly found in regions of the brain, where they play an important role in pain perception, mood regulation, memory, sleep, and appetite.

The CB2 receptors are found mostly in immune system areas. When CBD binds to these receptors, it works as an anti-inflammatory.

Cannabis is able to work directly on the skin, muscles, and any part of the body that contains cannabinoid receptors, which is why topical cannabis can be used on various parts of the body.

As well as activating CB1 and CB2 receptors, THC mimics the effects of anandamide and 2-AG. CBD, however, seems to boost the body's supply of endocannabinoids instead of acting directly on them.

THC stimulates CB1 receptors in the body, which regulate appetite, relaxation, altered senses, fatigue, and hunger. As a side effect of THC, munchies – the strong craving for food – can result from marijuana use, the well-known side effects of THC. 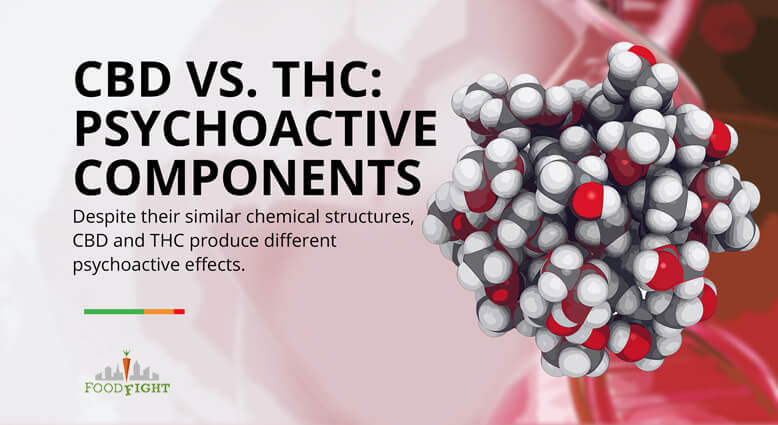 Though CBD and THC share similar chemical structures, their psychoactive effects are distinct.

The psychoactive effects of THC make people high, which is why they are associated with recreational cannabis. CBD, however, has beneficial physiological and psychological effects that are non-intoxicating.

How They Interact With Each Other

Research indicates that CBD-rich products can be therapeutic without creating euphoria when used in combination with relatively little THC.

Since CBD binds to the CB1 receptor, it has the ability to reduce the psychotropic effects of THC. CBD can also reduce anxiety, paranoia, and short-term memory loss when used in combination with THC.

Even though there is evidence that CBD and THC interact positively, most products on the market contain only either THC or CBD.

Whole plant medicine could sway the trend, however, as evidence emerges about its “entourage effect.” Advocates of whole plant therapy contend that cannabis is best used in its purest form, which contains more than 400 trace compounds. Instead of CBD alone, whole-plant, full-spectrum cannabinoids work more efficiently on human endocannabinoid receptors.

Health Benefits of THC and CBD

CBD and THC can provide the same relief for several medical conditions. Some people may prefer to take CBD instead of THC because of the absence of euphoric side effects.

In June 2018, the U.S. Food and Drug Administration (FDA) approved the Epidiolex for treating rare, difficult-to-control forms of epilepsy. It is the first prescription medication that contains CBD.

Do note that taking too much THC could aggravate pain symptoms. THC must be consumed in small doses when used for pain relief.

Side Effects of CBD vs. THC

Even in large doses, CBD is well tolerated in humans. According to research, any side effects from taking CBD are likely the result of cannabidiol interacting with other medications.

The psychoactive effects of THC include anxiety, panic attacks, paranoia, intensified sensory experiences, time distortion, and altered social behavior. THC overdose can have severe side effects such as agitation, psychosis, delusions, and hallucinations.

THC has also been proven to have acute and long-term negative effects on the parts of the brain that control memory and learning.

Those who smoke weed could be susceptible to constant colds, coughing, phlegm, and bronchitis. THC can compromise the immune system of the lungs with enlarged bronchial passageways and irritations of the airways, thereby increasing the risk for infection.

Marijuana intake can dramatically increase heart rate and stays elevated for around three hours. Not only will cannabis smoking speed up a heart rate by 20-100%, but it will also raise blood pressure while sitting and drop blood pressure when standing up.

THC addiction can also have negative social consequences, with strong cravings and seeking out marijuana.

CBD does not cause harmful cognitive effects that are associated with THC. In fact, CBD might be able to counteract the psychoactive effects of THC. [12]Niesink, R. J. M., & van Laar, M. W. (2013). Does Cannabidiol Protect Against Adverse Psychological Effects of THC? Frontiers in Psychiatry, 4. https://doi.org/10.3389/fpsyt.2013.00130

Cannabis plants that contain high THC and low CBD could cause a stronger ‘stoned' feeling. On the other hand, strains with high CBD and low THC produce a weaker, more relaxed effect.

Given the increasing popularity of medical cannabis, growers are turning their focus on creating strains that contain a higher CBD content to minimize psychoactive side effects.

Research has also shown that CBD is non-toxic and has no risk of lethal overdose.

Legal Status of CBD and THC

Cannabis laws in the United States are constantly evolving. Marijuana and THC are included on the list of controlled substances, so they are illegal under federal law.

However, 20 states plus Washington D.C. have legalized medical marijuana as long as a licensed physician prescribes it.

There are few states that have passed laws that make medical CBD legal. If marijuana is legal in your state, you should be able to buy CBD without issue.

CBD is also found in hemp, which is legal in all 50 states. Many companies have taken advantage of this loophole by importing high-CBD hemp extracts instead of sourcing from marijuana growers.

Before you try to buy CBD or THC, read about your state laws.

It is possible for THC to be detected on a drug test, even several days or weeks after use, since cannabinoids are stored in fat cells.

Do note that industrial hemp contains less than 0.3% of THC, so there could still be some trace of the compound. You might test positive for THC even if you have not used it.

CBD oil may contain small amounts of THC because THC is present in hemp plants. Typically, marijuana has an average THC content of 12 percent, while hemp is restricted to 0.3 percent.

Cannabis has been around for thousands of years, treating various ailments across cultures around the world. As more countries start to legalize cannabis, scientists are now beginning to unearth the vast potential of this plant and its applications in modern medicine. Restrictions and regulations, however, have slowed down and limited the pursuit of scientific research into the therapeutic effects of cannabinoids.

A report on CBD's potential clinical uses was published by the World Health Organization (WHO) in October 2017. CBD is now unequivocally proven to be effective for treating certain forms of epilepsy, including Dravet syndrome, a severe childhood epilepsy characterized by drug-resistant seizures.

Clinical and pre-clinical studies have also demonstrated that CBD has analgesic, anti-inflammatory, anxiolytic, antipsychotic, neuroprotective, hypoxia-ischemia, and anti-tumor properties. [15]Rudd, J. (2022, May 31). CBD vs THC – What are the Main Differences? Analytical Cannabis. Retrieved May 19, 2022, from … Continue reading

According to the WHO, CBD might also be beneficial to patients with Alzheimer's disease, Parkinson's disease, and Huntington's disease, as well as anxiety, depression, psychosis, multiple sclerosis, and cancer.

There are two drugs already approved by the FDA that contain THC or its synthetic counterpart.

A third drug – Nabiximols (Sativex®) – is currently under review in the United States. This mouth spray contains a one-to-one ratio of whole-plant THC and CBD extracts. Sativex® is already available in Canada, Australia, the United Kingdom, Spain, and 25 other countries for treating muscle spasms from multiple sclerosis and cancer pain.

CBD and THC have exhibited great potential in reducing symptoms associated with various medical conditions. Before trying hemp CBD, talk to your healthcare provider. Some drugs do not interact well with cannabinoids, so you should consider the possibility of side effects if you are currently on medication. If you do not want any of the acute and long-term adverse effects of THC, stick to CBD-rich supplements.

High Blood Pressure – The Symptoms, Causes and How to Prevent

CBD Oil and Diabetes: How Cannabis Is Bringing Hope to Millions

How Vegan Diet Can Help You Manage Diabetes

The Role of Ketones in Diabetes: The Connection Between Diabetes and Ketosis

Diabetes Testing Options: Which Is Best for You?