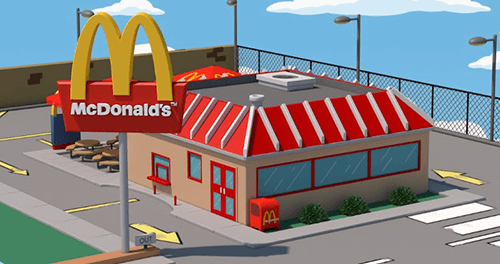 In 2014, McDonald’s plans to offer customers the option to substitute a side salad, fruit, or vegetable as a replacement for French fries in value meals. They have also pledged to promote only water, milk, or juice in its Happy Meal promotions, though soda will still be available for purchase. The chain hopes to fully implement these changes in 85% of its markets by 2020. What does that really mean?

In 7 years, McDonald’s may have dropped soda from its Happy Meal advertisement. In 7 years, customers may be able to request a salad instead of fries. McDonald’s executives say they are “championing children’s well-being.” In what world?

… and the company’s attempt to do as little as possible in implementing menu changes.

It doesn’t mean you’ll be asked only whether your kid prefers milk, water or juice; it just means there won’t be pictures of soda with Happy Meals on the menu boards.

It’s not like milk will become the default. No: McDonald’s will actively discourage the drinking of soda (likely its most profitable item and among the least healthy items in the American diet) only when it’s forced to.

Our recommendation to McDonald’s: make fruits, veggies, and milk the default, not the substitute. Now, that may sound far-fetched; as Bittman says, nobody goes to McDonald’s looking for a salad. But if the company truly wants to champion children’s health, they will work to make the healthy choice the easy choice. McDonald’s serves nearly 70 million customers around the world per day. McDonald’s is a business whose success has been powered by its cheap, high-calorie grease bombs.

We get that abruptly swapping French fries for carrots would likely hurt their bottom line, at least in the short term. But with its global reach, doesn’t the fast-food chain have any responsibility to positively influence the eating habits of hundreds of millions of people – not just contribute to health problems like obesity, diabetes, and heart disease that are so rampant, especially in the United States? Surely a company claiming to champion children’s health has some duty to be a leader in this regard.

McDonald’s menu items satisfy our hard-wired biological craving for salt, fat, and sugar. It is no easy task to swap out fries for carrots, and even harder to ensure consumers would purchase them. CEO Don Thompson said, “What we don’t want to do is just put something on the menu and say, ‘Hey, we did it.’ We really want consumption.” He’s right: putting vegetables on the menu doesn’t mean customers will eat them. We want consumption, too – consumption of the right foods, not McDonald’s current menu items, which is why McDonald’s might also consider educating consumers about their proposed healthier options.

Education is a critical factor in helping people evolve their dietary choices. If people are to change the poor eating habits encouraged by fast food chains for decades, they must first understand why nutritionally bankrupt foods are poor dietary choices and why foods like fruits and vegetables are smart choices.

Being educated about food and how it impacts their health will help customers accept healthy menu options as the default options, not the substitutes

As it stands, McDonald’s is doing its best to appear nutritionally progressive without actually hoping to change its customers’ taste for traditional fast-food fare.

Maybe the chain’s best hope for making a winning switch to produce is by educating its consumers, even if that means implicitly panning their traditional menu offerings. Over time, maybe customers will go to McDonald’s for a low-cost salad.

Challenge of the Month: December

The Whys of The Transformer: Michael Pollan Calls Us Back to The Kitchen