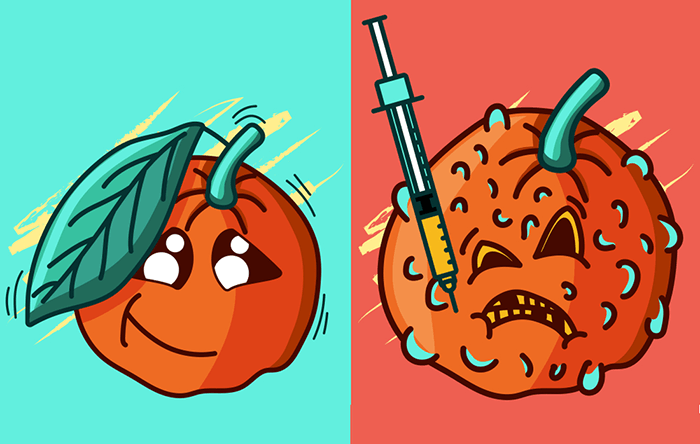 The subject of GMOs (which stands for genetically modified organisms) is controversial, only because those trying to push them on everyone are dishonest. Most major food companies and grocery stores and restaurants want to use GMOs, and they don't want you to know you're eating them.

The reason for this is because GMOs increase their profits, but have never been proven safe for humans – and there are multiple studies suggesting they are harmful, which the food companies try to discredit or hide. However, the same food companies that fill products with high fructose corn syrup, trans fat, forms of MSG, and other assorted drugs and poisons will never admit that their highly profitable products are detrimental to human health.

Also, many government organizations that are supposed to protect us from these corporations are in collusion with them, while pretending to be doing their job. The United States FDA is the perfect example, often attacking natural supplements, organic foods, and things that are actually good for you while promoting and protecting junk.

The severity of the problem with governments, and the lies of food companies, and the medical industry which profits from everyone being ill, is far too much to cover all of it here, although researching the subject with a sincere desire to know the truth will lead you to what you need to know. Simply put, don't trust what anyone says, including me, until you examine the evidence for yourself.

Below I explain what GMOs are and how to avoid them. This is something few people take seriously, and most people are entirely ignorant of this issue, or they are unaware of the importance of it and don't look into it sufficiently. Be informed and protect yourself against predatory corporations and governments.

Reasons for and results of GMO cultivation

The two biggest “successes” so far for GMOs are (1) engineering plants to withstand powerful pesticides which would typically kill the plants, and (2) engineering plants, so they contain poisons that repel pests inside the structure of the plant, to supposedly lessen the need for external pesticide spraying.

What each of these so-called accomplishments has really accomplished is to expose people worldwide to plants and DNA in foods that humans have never encountered before, which have been shown to seriously harm animals in laboratory tests, and also to cause organisms to adapt to the pesticides.

You see, natural selection occurs quicker than the companies can develop new GMO crops, and so already there are weeds and insects immune to the more powerful pesticides and the plants with pesticides inside them. Meanwhile, thousands upon thousands of people are being exposed to these poisons in higher amounts than ever before, mostly without knowing anything about it.

The food companies don't want you to know that their GMO “Franken-foods” (as multiple doctors have called them in articles I've read) are any different from the normal unaltered organisms. “Trust us,” they say while doing everything they can to withhold information and to otherwise prove that they're 100% untrustworthy.

Which foods are GMO and How Can They be Avoided?

Some people don't care, but for those of us who do, here's a guide to GMOs.

The following GMO crops are grown in many places worldwide, although quite a few countries have banned them. The United States is the leader in growing and supporting GMOs:

Also, there may soon be GMO salmon (yes, an animal), wheat, apples, potatoes, oranges, and more.

Many other ingredients are made from items on the list above, such as high fructose corn syrup, maltodextrin (usually comes from corn), corn starch, or soy milk.

If you see “sugar” in an ingredient list, it probably came from GMO sugar beets. Look specifically for the word “cane” as in “cane sugar,” or “evaporated cane juice” to avoid GMOs, because there is no GMO sugar cane.

Also, note that animals are often fed GMOs. Unless an animal product states that it comes from an animal that is 100% pasture raised, or 100% grass-fed, or if it says it is organic, then the animal was probably fed GMOs.

The company Monsanto, makers of Agent Orange and GMO crops, also makes the artificial growth hormone rBST, which is in many dairy products. Any dairy products that are not organic, or do not specify that they are free of this chemical, are from cows fed GMOs.

As much as you can, buy whole foods and make things at home. If you buy from stores, look for organic or specific statements that the product contains no GMOs, if there are any ingredients listed above.

One excellent idea is to grow food at home if you are able to do so and make sure the seeds are trustworthy. For example, if you want to grow corn in the backyard, ensure it's not GMO. Homegrown food tastes better and you know it's trustworthy if you grew it.

Many restaurants use GMOs like crazy. Limit restaurant visits or look for items not containing what's listed above. Doing this may be hard.

You may, for example, buy French fries because potatoes are not GMO, although the potatoes most likely will have been fried in unhealthy oils, which may or may not be GMO. So you're avoiding one problem but exposing yourself to another.

Beware of products with the word “natural.” This is a meaningless statement and utterly unregulated by governments, and the products may still have GMO ingredients.

Do online research. The more you avoid GMO ingredients, the more you influence companies to stop putting them in foods. You vote with your money whenever you buy anything, and you create a demand for whatever you decide to purchase. There are many smaller ingredients derived from corn, for example, not listed above, which you could research and look for ways to avoid.

Do Mushrooms Help With Diabetes? The Answer May Surprise You

How To Eat Healthy With Diabetes: A Guide for Diabetics

The Diabetes Plate Method: Eating to Control Your Blood Sugar

10 Keto Friendly Low-Carb Fast Food – Can You Really Eat Them?